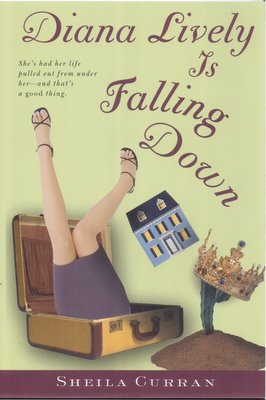 Diana Lively is falling down! Will she be able to get herself back up?

Booklist called Sheila Curran's novel, DIANA LIVELY IS FALLING DOWN, "Beautifully detailed and rich in exceptional characterization . . . . Curran's novel gently reminds readers that fantasy has a place in everyone's life, and dreams can come true. Uniquely uplifting and never didactic, this is a gem." It doesn't get much better than that!

Like the legendary London Bridge, Diana Lively has been transplanted from England to the Arizona desert. Trained as an architect and top in her class, she makes dollhouses. Widowed at a young age, she distrusted people who were kind to her, and married Ted, the one man who wasn't. Maybe it's a good thing that Diana Lively's life is suddenly out of her control.
A brash American billionaire wants to put up a King Arthur Theme Park smack in the middle of the Arizona desert. With dollar signs dancing in its head, Oxford University is only too happy to send Ted Lively, their resident Arthurian expert, to consult on the project. There, in the most unlikely place, in the most surprising ways, Diana is about to discover that the happiness she thought was lost forever can shower down on her again, can flood her dry life like a lake in the desert, and make it bloom.

Oh, and Ted. Ted is about to discover that there is justice in the world...