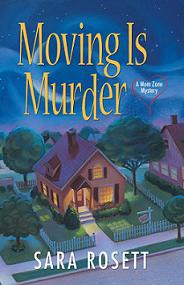 As someone who just relocated, let me tell you - Moving Is Murder. That also happens to be the title of Sara Rosett's new book, which is perfect. Here's a little about it:

Air Force wife Ellie Avery is an ace at moving. A professional organizer, she plans ahead, packs efficiently, and even color-codes the boxes. But nothing in her bag of tricks could prepare her for the secrets that shadow her new neighborhood…secrets that drive one of her neighbors to murder.

Moving four times in five years has honed Ellie’s considerable skills. But moving with a newborn daughter and husband Mitch in tow, a record-breaking heat wave, and the realization that their dream neighborhood is known as Base Housing East is enough to make her turn to chocolate for comfort. Now half of their neighbors are with the 52nd Air Refueling Squadron. Forget privacy.

Forget peace of mind, too. Driving home from her first squadron barbecue, Ellie finds neighborhood environmental activist Cass Vincent dead on the side of the road. The police call it an accident—Cass, fatally allergic, was stung by wasps—but Ellie’s not so sure. And when it looks like Mitch’s best friend might be a suspect in the murder, Ellie starts snooping in earnest. What she finds shocks her—and when suspicious “accidents” start happening in her own backyard, Ellie realizes she’s getting closer to the killer…maybe too close!