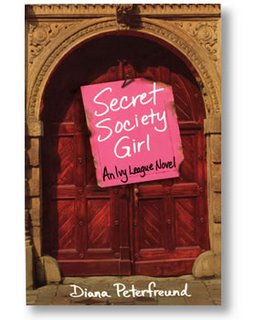 My friend, Diana Peterfreund, has a new book out - SECRET SOCIETY GIRL. I love books about college, and, because Diana actually went to Yale and has experience with secret societies, I can't wait to read the story. In addition to her fabulous new novel, Diana also contributed an essay to EVERYTHING I NEEDED TO KNOW ABOUT BEING A GIRL I LEARNED FROM JUDY BLUME. It also means I have a bonafide picture of Diana doing a cannonball into a pool during her adolescent hay day.

In any case, here's a little bit about Diana's book, enjoy!

Secret Society Girl takes us into the heart of the Ivy League’s ultra-exclusive secret societies when a young woman is invited to join as one of their first female members.Elite Eli University junior Amy Haskel never expected to be tapped into Rose & Grave, the country’s most powerful–and notorious–secret society. She isn’t rich, politically connected, or…well, male.

So when Amy receives the distinctive black-lined invitation with the Rose & Grave seal, she’s blown away. Could they really mean her?Whisked off into an initiation rite that’s a blend of Harry Potter and Alfred Hitchcock, Amy awakens the next day to a new reality and a whole new set of “friends”–from the gorgeous son of a conservative governor to an Afrocentric lesbian activist whose society name is Thorndike. And that’s when Amy starts to discover the truth about getting what you wish for. Because Rose & Grave is quickly taking her away from her familiar world of classes and keggers, fueling a feud, and undermining a very promising friendship with benefits. And that’s before Amy finds out that her first duty as a member of Rose & Grave is to take on a conspiracy of money and power that could, quite possibly, ruin her whole life.

A smart, sexy introduction to the life and times of a young woman in way over her head, Secret Society Girl is a charming and witty debut from a writer who knows her turf–and isn’t afraid to tell all....