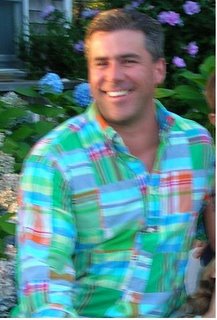 When we arrived on Martha's Vineyard, the first thing my son and husband did was go bridge jumping in Oak Bluffs. So the first thing my daughter, friend Kari and I did was head into Edgartown to go shopping. We stopped in this men's store and I spotted a shirt I just had to get my husband - this bright green plaid shirt on the left. I love to dress John and this shirt was screaming, "Buy me!" In the next store, two Lily Pulitzer dresses were also screaming, "Buy me." Later my head was screaming, "What were you thinking, you idiot?" I have a closet filled with Lily pants and dresses that seem so darn adorable when I see them in a store on the Vineyard, and so totally impractical once they're hanging next to a pair of jeans. What can I say, it was vacation shopping intoxication.

In any case, when our friends from Chicago arrived and John put on this shirt to go out to dinner, they cracked up laughing. They could not believe he would, in all seriousness, wear this brightly colored plaid shirt out in public. Still, he knew I loved it, so John wore it out even though he proceeded to be harassed by our friends. Continually. For hours.

Well, several nights later, John and two of the guys who were staying with us decided to go into town for drinks. And he wore the shirt again. And it was a hit. Apparently, women were all over him at the bar, telling him how much they loved his shirt. Poor Doug and Will were cast off to the side in their ordinary Polo shirts that seemed downright boring compared to John's green and pink and orange and blue plaid creation. So I'm not crazy, and I'm not the only woman who thinks a guy in plaid is cute. And you can't help but love a man who is confident enough to sport a shirt most men wouldn't even dare to wear. Although I suppose the ten drunk and beautiful models drooling over you at a bar helps get you over a fear of plaid real fast.