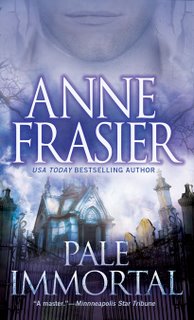 Thirsty for a little blood? Then give Anne Frasier's vampire tale, PALE IMMORTAL, a try. With the summer ending and the weather being so rainy, pale definitely describes how I've been feeling lately. And without the nasty bites on my neck.

Welcome to Tuonela, a sleepy Wisconsin town haunted by events of 100 years ago, when a man who may have been a vampire slaughtered the town's citizens and drank their blood. Now, another murderer is killing the most vulnerable...and draining their bodies of blood.Evan Stroud lives in darkness. The pale prisoner of a strange disease that prevents him from ever seeing the light of day, he lives in tragic solitude, taunted for being a "vampire." When troubled teenager Graham Stroud appears on Evan's doorstep, claiming to be his long-lost son, Evan's uneasy solitude is shattered.Having escaped Tuonela's mysterious pull for several years, Rachel Burton is now back in town, filling in as coroner. Even as she seeks to identify the killer, and uncover the source of the evil that seems to pervade the town, she is drawn to Evan by a power she's helpless to understand or resist....As Graham is pulled deeper and deeper into Tuonela's depraved, vampire-obsessed underworld, Rachel and Evan team up to save him. But the force they are fighting is both powerful and elusive...and willing to take them to the very mouth of hell.