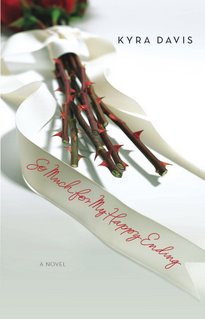 My friend (and contributor to the Judy Blume anthology), Kyra Davis, has a new book out. - SO MUCH FOR MY HAPPY ENDING. In a departure from her light-hearted mystery series (which is great, check it out), Kyra tackles the subject of mental illness. With her usual wit and humor, Kyra probes a very serious subject, and one that is close to her heart: What happens when the man you love and subsequently marry turns out to be someone entirely different from the man you dated? How do you recognize the difference between mental illness and the usual marital problems that afflict all couples? How could a man who was so romantic and loving turn out to be bipolar ?

Kyra explores these questions as she chronicles the relationship between April and her soon-to-be husband, Tad, who is the man of her dreams: romantic, attentive and adoring who holds the promise of a normal, secure life. But on their honeymoon—Tad’s withdrawn behavior, his refusal to leave the hotel room, and other disturbing behavior—are cause for alarm. When they return home, however, and Tad reverts back to the man she knows and loves, April rationalizes his behavior during their honeymoon, but she can’t quite dismiss it.

SO MUCH FOR MY HAPPY ENDING chronicles every step of April’s relationship with Tad, from the engagement and subsequent marriage, through the unraveling and finally the turning point. As April tries to cope with what is happening to her husband, Tad is grappling with the demons that are driving him apart from April and threaten to destroy the one stable anchor in his tumultuous life.