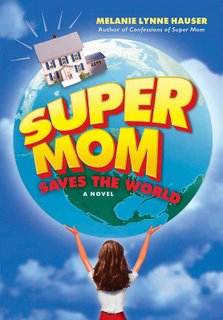 Another friend, another book! This time it's Melanie Lynne Hauser's sequel to SUPERMOM - SUPER MOM SAVES THE WORLD. This time it's six months after the Horrible Swiffer Accident that left her a superhero, and Birdie Lee is still adjusting.

For starters, she's hearing voices and having lustful thoughts about Mr. Clean. Then there's the fact that her daughter is suddenly sporting a bright pink streak in her hair, courtesy of her new friend Vienna (and if recent history has taught us anything, we all know that a girl named after a foreign city is going to be trouble). Birdie's son is experiencing his first case of puppy love, her nerdy scientist love interest has just proposed marriage, and her annoying ex-husband is suddenly less annoying. Which can only mean he's up to no good.But things get even more sinister when her hometown of Astro Park gets Little League fever in a big way. Rabid parents, performance-enhancing Gatorade and a domed stadium on shaky - potentially explosive - ground are just the beginning of Super Mom's problems; throw in a ticked off school janitor and a corrupt mayor, and Super Mom has her hands full. Can one superhero — one mother — struggle to keep her teenagers in tow with one hand while saving her hometown from disaster with the other — while trying to find time for herself as she plans her marriage to her very own Super Man? Only if she’s Super Mom!